One of the earliest features that I implemented for Gridpulse Legions was fog of war. My intention was for the feature to work similarly to how it works in the original Starcraft; that is to say, it should satisfy the following criteria:

At a high level, the solution I came up with was to render the visibility information into a RenderTexture, which is then drawn onto the terrain using a projector through a shader that takes care of rendering and blending the shroud.

Here’s a video of the feature in action:

Let’s go over each of the components in turn.

The first piece of information that we’ll need is the visible areas – that is, the areas that are currently within the line of sight of the player’s units. My solution involved two steps:

The visibility mesh generation can be as simple as a static mesh with its parent set to the unit whose visibility it is representing (so that it automatically moves with that unit). If your line of sight algorithm is more complex and takes elevation and obstacles into account, you may needed to procedurally update your mesh on the fly using a 2D visibility algorithm. The specifics of these algorithms are beyond the scope of this article and will differ per game, but for simplicity’s sake, you can just assume that this mesh is simply a static flat mesh floating above the unit’s head. It makes no difference to the rest of the implementation how the mesh is generated.

Place these meshes on their own layer. We’ll call this layer FOV and we’ll use it in the next step. Make sure that the main camera isn’t rendering this layer. Here’s what it’ll look like in the scene: 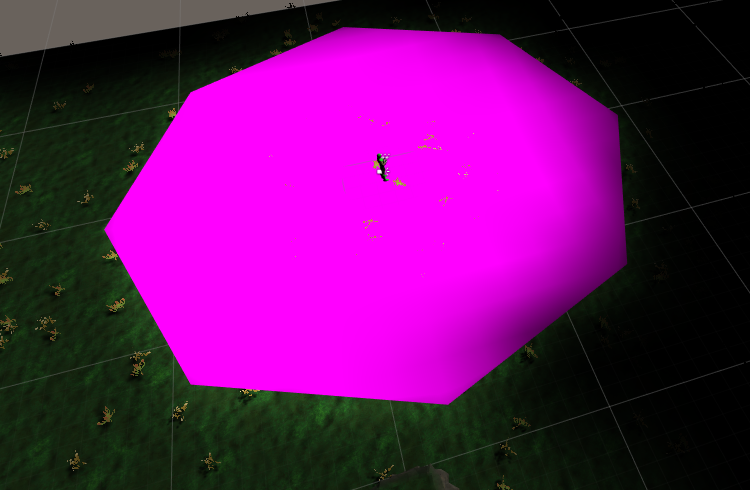 This mesh represents the visible range for a single unit.

Once you have your visibility meshes, you’ll need to set up two cameras to render these meshes, each to their own render texture. Why two cameras? Because we’ll need a separate texture to display unexplored areas (completely opaque black) from the one used to display discovered areas that are not currently within the line of sight (semi-transparent black). Ultimately, we want to render textures that look like this

, which we will then project onto the terrain using a Projector component. The pink areas in the image above correspond to the visibility meshes.

Set up the camera size/position so that it covers the entire map and configure it to only render the FOV layer. Also set the Target Texture to the corresponding RenderTexture. 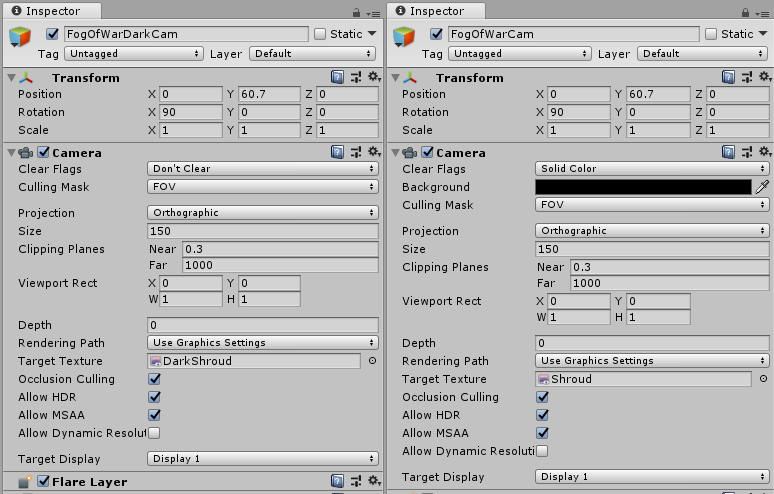 Both cameras will be identical in setup except for two things:

With the above setup, you should now have two RenderTextures accessible during runtime whose pixels directly represent the areas of your map that need to be covered in fog. The next step is to actually draw the fog. For this, we’ll need a few different things:

Let’s take a look at that shader. I’ll show just the fragment shader below, since the rest of it is just boilerplate shader code for projectors (see the full code snippet here).

As you can see, it’s using the alpha values of the shroud textures to figure out where to render the fog. When the pixel corresponds to an area of the shroud texture where the visibility mesh was rendered, the alpha will be 1 and the _Color variable will become transparent, resulting in the fog not being visible at that pixel.

Both projectors will have this component. The script just creates two inner textures and does a continuous blend between the two textures by increasing the interpolation amount in a coroutine and feeding this value to the shader, which uses this float to lerp between the alphas from the previous and current textures.

Here’s what the actual projector component will look like in the inspector (make sure you configure it to cover your map and to project onto the correct layers based on your game’s specific needs): 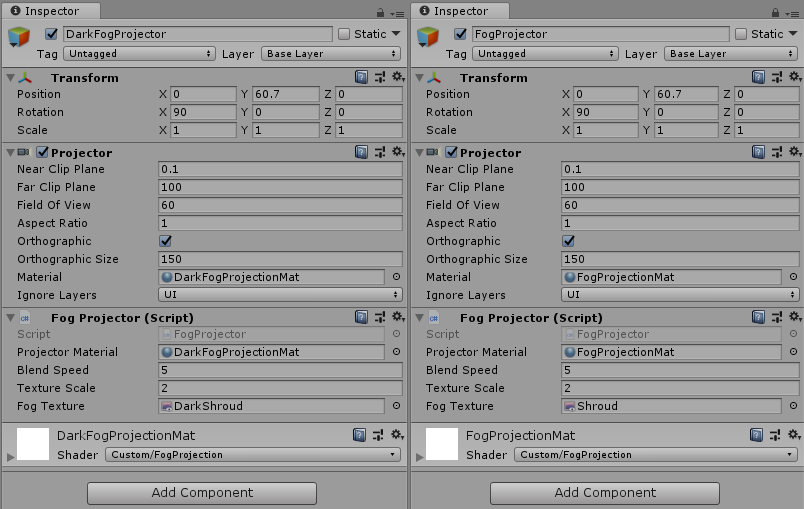 Here’s what the two shroud materials look like. Notice that they differ only in the color (notice the white bars under the color, which represent the alpha, are different lengths):

The texture fields are empty because those are created in script.

With these components in your project/scene, you now have everything you need to get the fog working your game. The fog cameras will render the visibility meshes to the shroud textures. The projectors will then use these textures to render the shroud onto the terrain, blending the fog for smooth animation.

And there you have it. Attractive fog of war in Unity.

25 thoughts on “Implementing Attractive Fog of War in Unity”